Countries in English 👇 Learn with Flags and Games

Countries! They are one of the main starting point of people for international conversations in English. People expect you to know the names of their countries while speaking. Then, what is a country first of all? A Country is a certain area of land in the world with its own nation, government and economy. The word “state” is also used to refer to a country, so they are considered as synonymous terms in most cases to mean self-governing political parts of the world. Some countries are independent which means they are governing themselves and have sovereignty over their country.

⬤ Names of some countries in English 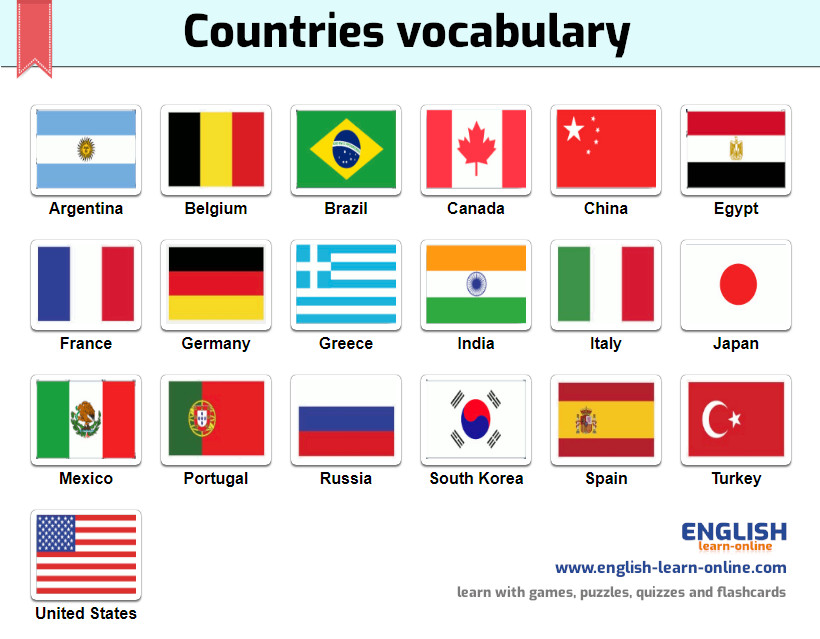 Memory Card Game for Names of Countries in English

Word Scramble Game for Countries in The World

Word Search Puzzle for States and Countries in The World

Make Words Game for Countries of the World

Body Parts in English 👨 With Games and Listed Images

Clothes Vocabulary in English 👕 Learn with Images and Flashcards

Colour Names in English 🎈 with Tests and Images

Verb to be (am, is, are) – With Examples and Online Exercises

Modal “CAN” – With Explanations Exercises and Activities

© www.english-learn-online.com
All right reserved
You can write us any mistakes or read our about page or see our privacy policy.